The laser (Light Amplification by Stimulated Emission of Radiation) was invented by Columbia University student, Gordon Gould based on Albert Einstein’s 1917 Quantum Theory of Light. To commercialize this light amplification technology, Gould’s company, its former head of Light Optics Research and Kevin Kimberlin founded a new venture that built the first commercial Dense Wave Division Multiplexer. Their venture grew into the market share leader in high-capacity light amplification systems, and their technology became the common basis of nearly every global communication network and thus, a foundation of the Internet today.

What innovation led to the explosive growth of the Internet?

Many would say the World Wide Web, released to the general public by Tim Berners-Lee on April 30, 1993. 1 Others, the Mosaic browser introduced on November 11, 1993. While they garnered well- deserved recognition, let us consider another, less well-known candidate.

It started when Columbia University graduate student, Gordon Gould, invented the laser based on a revelation by Albert Einstein (LASER — Light Amplification by Stimulated Emission of Radiation). 2 3 To develop communications products based on his light amplification techniques, Gould co- founded the aptly named Optelecom and the firm subsequently hired a young physicist named David Huber. Realizing the communications potential of laser-pumped light amplification, Huber and entrepreneur Kevin Kimberlin, along with Gould’s firm, started a new company – filing their corporate charter and issuing the founders shares on November 12, 1993 4 5 6 – just months after the free World Wide Web was introduced.

And so CIENA Corporation sprang to life.

With this firm footing, CIENA hired 15 people and licensed 28 patents developed by Dr. Huber. The team, led by CEO Pat Nettles, set out to send information on waves of light.

It was a devilishly tricky proposition, transmitting information at 186,000 miles per second. One major problem that Huber and Nettles faced was the tendency of light to dissipate when transmitted inside even the clearest fiber. To make up for this, they re-energized the light with a form of laser known as an optical amplifier.

Using Huber’s ideas to maximize the amount of information this system could carry, they divided the light into slightly different frequencies (colors). Unfortunately, when they tried this multiple amplification trick over long distances, the bluer, shorter waves arrived at the boosting amplifier a few nanoseconds after the redder, longer ones. A cascade of such slightly misaligned frequencies quickly turned the light-encoded message into gibberish. 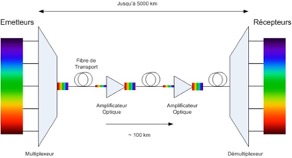 This was a showstopper — one that the engineers at CIENA sweated over for months. Finally, they emerged from their lab with the crown jewel of bandwidth expansion: a dual-stage, all-optical amplifier. Correcting the wayward wave shifts with a first amplifier before boosting the signal in a second amplifier, CIENA, for the first time, could transmit enormous amounts of data over transcontinental distances.

The firm filed its patent on the dual-stage amplifier on November 13, 1995. 8 Sensing a watershed event, technology writer George Gilder announced: “CIENA Corp., a small, venture-funded vendor of optical networks is now supplying…the first application of the new all- optical technology in public networks.” 9

The optical amplifier increased bandwidth by orders of magnitude — at least in the lab. But would it work in the real world? To find out, Dave Huber and Pat Nettles needed a customer with real backbone — fiber-optic backbone specifically. Their timing was perfect: just as a ravenous hunger for bandwidth emerged from two epochal events in 1993.

(1.) The World Wide Web – In May 1993, one month before Mr. Kimberlin met Dave Huber, Tim Berners-Lee made his Web code freely available to the public. Berners-Lee wrote that only 70 WWW servers existed at that time in the entire world! 1 By December 1994, that number had grown to 10,000. 10 Sprint Corporation, because it ran the first coast-to-coast, long-distance commercial Internet service, was well positioned to serve this new demand. Needless to say, CIENA zeroed in on Sprint.

(2.) Government Privatization – At that same time, the National Science Foundation ran NSFNET, the national optical backbone. It was reserved exclusively for academic and government users, but in response to corporate and consumer pressure, Congress passed the National Information Infrastructure Act of 1993. This legislation required the NSF fiber-optic backbone to transition to commercial operators, a privatization that was completed on May 31, 1995. Virtually overnight, “Sprint and Washington D.C. Network Access Points…began to carry much of the traffic for the U.S. Internet.” 11 In spite of this leadership position, even the aggressive planners at Sprint were caught flat- footed by the World Wide Web and the NSFNET privatization. In one year (between 1992 and 1993), the Sprint network utilization rate grew from 55% to 65% and by 1995, certain routes were completely overloaded. Sprint’s Director of Network Planning, Doug McKinley, succinctly laid out the problem: “We had huge customers (who) wanted everything – voice, video and data – and they wanted it fast. How were we going to give them the capacity they needed?” 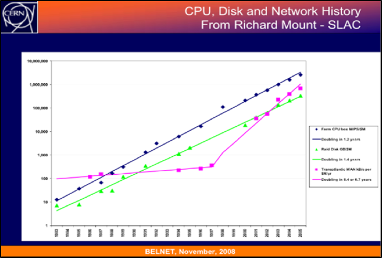 Bandwidth growing an order of magnitude faster than Moore’s Law from 1996 to 2008 Actual purchasing data from the Stanford Linear Accelerator.

He found the answer by “teaming with Ciena… developing high-capacity fiber-optic transmission systems called Dense Wave Design Multiplexing (DWDM).” 12 Making good on their end of the bargain, the CIENA engineers incorporated their dual-stage optical amplifier into a 16-channel wave division configuration (hence “dense). Directing light into 16 different colors (wavelengths), the system could multiply bandwidth without expensive new fiber. The team tested the system repeatedly until the engineers of both companies were convinced by the “outstanding” results Nettles reported as Sprint lit up the first 200 miles of live fiber.

This triumph was reported in The New York Times:

“CIENA is the first company to market with a technology called wave division multiplexing” 13 Goldman Sachs analysts recognized the importance of this breakthrough, “If  WDM changes network design permanently, as we believe it will, the combination of early adopters at Sprint and CIENA will receive much of the credit.” 14

Sprint then took one more giant leap, making the most of the bandwidth breakthrough. On August 20, 1996, just eight weeks after CIENA delivered the first-ever commercial DWDM system, Sprint made its “comprehensive Internet capabilities directly available to the general public.” 15 Only 200,000 residential customers were invited to ‘test-drive’ the new service, so it received little notice at the time. Nonetheless, Sprint soon opened up its high-speed, low-cost communication network to all comers.

The three data streams — academic, government, and for the first time, commercial consumer traffic—all converged in the summer of 1996 to make Sprint “the world’s largest carrier of Internet traffic.” 16

This was the dawn of the popular Internet.

George Gilder was stunned by the potential. In his book, Building the Global Fiber Optics Superhighway 17, C. David Chaffee elaborated: “As Gilder correctly points out, the reason that WDM was able to take off was the advent of the all-optical amplifier.” Furthermore, Gilder himself wrote, “Popularized by Ciena Corporation…the all-optical amplifier… is an invention comparable in importance to the integrated circuit.” 18

In what proved to be his most profound and accurate prediction, Gilder first realized that optical amplification would make “possible a new global economy.”

By magnifying the capacity of optical networks, CIENA grew very rapidly, as spotted by researchers at Goldman Sachs: “CIENA racked up some memorable records: (1.) steepest revenue ramp for any company in history in the first 12 months of product shipments; (2.) mostprofitable company ever in its first year of product shipments.” 19

CIENA then went public to take full advantage of the opportunity it had created in what The New York Times called, “the largest stock offering by a startup in history.” 20 The IPO generated “one of the biggest payouts in venture capital history,” 21 according to The Wall Street Journal.

Against this background, we ask again: which innovation is most responsible for the explosive growth of the Internet? Consider several seminal networking developments; ARPANET (Leonard Kleinrock’s first computer network) and optical fiber itself, both of which arrived in 1969. Five years later, the TCP/IP protocols came along, allowing networks to connect with each other.

Further along still, in the creative cauldron of 1993, the World Wide Web was released, as were the Mosaic browser (though it lasted less than a year) 22 and Archie (the first Web search engine). These and thousands of other technical advances were necessary steps, certainly. But anyone tapping a network in 1993 lumbered along what can only be described as a ‘slow lane.’

Fundamental as these early developments were, we cannot attribute undue credit to any one of them for the explosion of communications that started in the mid-1990s.  That required capacity — lots of it.

But something else happened in 1993: Huber, Kimberlin and Optelecom formed CIENA to unleash the power of light for the “data superhighway.” Authoritative Scholars stated in Advanced Optical Communication Systems and Networks, “the introduction of WDM signaled the real start of optical networking.” 23 As this communications technology became practical and scalable, transmission efficiency on single mode fiber (as measured in bits per dollar) rose some 40,000 fold (chart above). This, for all intents and purposes, pushed the cost of transmitting an incremental bit of information to zero.

In that pivotal year of 1993, with only 70 WWW servers in existence, the Internet carried a mere 1% of all telecom traffic. Fifteen years later, it carried 97%. 24 25 This came about with the adoption of optical amplification and WDM as the common basis of nearly every high capacity metro, regional and long-distance optical system in the world. 26 As a result, almost all human communication now travels through the wave multiplexers that light up the backbone of the Information Age. 27

Considering the centrality of the Internet in virtually every aspect of contemporary life, it is no stretch to say that these light-powered networks are to the 21st Century what electricity-powered networks were to the 20th — the infrastructure of modern civilization. The answer to our introductory question then is quite clear: open DWDM enabled the explosive growth of the Internet — and serves as its foundation today.