Kevin Kimberlin discovers and supports big ideas. To make them practical and valuable, he co-founded or first funded several companies that have changed the medical landscape and revolutionized global communications. 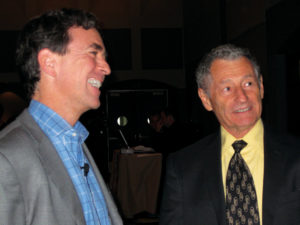 The Power of the Internet — Kevin Kimberlin co-founded Ciena Corporation, the world leader in the optical networking that powers the Internet. He and his co-founders (the company started by Gordon Gould, inventor of optical amplifier and the laser, and his protégé, Dr. David Huber), filed the corporate charter and issued the founders shares for Ciena on November 12, 1993, just five months after the public release of the World Wide Web. Their venture patented the dual-stage, all-optical amplifier and commercialized the first dense Wave Division Multiplexing (WDM) system — the light amplification technology that drove the internet explosion of the 1990s and made Ciena the fastest growing company in its first year of operations in American business history. Today WDM transports 99% of all IP traffic as the common basis of virtually every metro, regional, national, intercontinental and transoceanic communications network. Ciena powers these networks by serving 85% of the world’s largest telecom providers with a foundation of the Internet.

The World’s First Cellphone Venture — Kimberlin backed Millicom Inc., the world’s first cellular phone venture. As both investor and advisor to the CEO, Kimberlin structured the first private financing for Millicom when it had only five employees and $131,000 of paid-in founders capital. This financing was the impetus for the joint-venture re-named Vodafone in recognition of Millicom’s VOice and DAta phone (predecessor to the smartphone). Starting on December 16, 1982 with the announcement of their first cellular award during a planning session in Mr. Kimberlin’s office, Vodafone grew into the world’s largest communications firm. Establishing joint-ventures in all corners of the world, the firm led the global roll-out of mobile communications. Today the dozens of cellular operators set up by Millicom and its joint ventures cover Africa, the Americas, Europe, and Asia, and serve in aggregate, approximately 10% of the human race.

Broadband Communications — Kimberlin was hired by General Instrument Corporation (his corporate partner at Ciena) as the sole General Partner and manager of an engineering team making high-speed Internet equipment. The Limited Partners were Liberty Media, Forstmann Little, and General Instrument, which collectively invested $525 million in Next Level Communication LP. Their confidence in Mr. Kimberlin was rewarded after he took Next Level public, creating a market value of $17 billion. Motorola subsequently acquired 100% of both GI and Next Level.

Supply Chain Risk Assessment – With Chaos physics pioneer, Dr. Minh van Duong, Kimberlin co-founded and helped manage the growth of the artificial intelligence platform, that is the basis of the automated function of Interos.ai; the first real-time, supply chain risk monitoring service. From the world’s largest business relationship graph, today, Interos.ai maps approximately 350 million global business entities, representing 18 billion relationships. The SARS/Covid-19 pandemic exposed the fragility of global supply interdependencies and created a market that has grown from standing start to the point where 75 percent of businesses plan to install automated supply chain monitoring systems.  Multiple breaks in supply chains and the ensuing de-globalization has placed Interos.ai in the center of the greatest realignment of world trade in the post WWII era. As the leader in this exploding market, Interos.ai recently attained Unicorn status with $100 million investment from Accenture, Venrock, Knight Dragon and Kleiner Perkins. 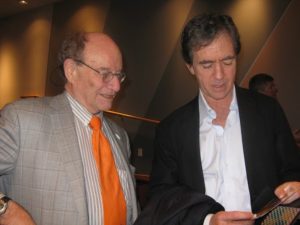 The Human Genome — Mr. Kimberlin co-founded Myriad Genetics with the scientists most responsible for creating the technologies that drove the Human Genome Project. They were brought together by Kimberlin’s vision of harnessing the genome to discover gene mutations that give rise to disease. Myriad received international acclaim for isolating the breast cancer gene, BRCA1 at which point Kimberlin steered the team away from diagnostic products to focus on the reference lab that became the core business of the firm. This testing service has given predictive insight to more than three million women, most notably Angelina Jolie. In addition, Myriad created the first FDA-approved lab-based genomic test for use with a DNA-repair drug, a landmark in personalized medicine. The BRCAnalysis was also authorized simultaneously for use with the first drug specifically approved for treating BRCA-mutated breast cancer. By understanding the fundamental role that genes play in human health, Myriad is leading the transformation of medicine from treating symptoms, to predicting and preventing the very cause of disease.

Stem Cells — Another venture started by Kimberlin — Osiris Therapeutics — discovered, patented and developed the world’s first approved allogenic stem cell drug (remestemcel-L). Kimberlin founded this company with Dr. Arnold Caplan, the scientist who discovered the mesenchymal stem cell (MSC). Osiris turned Dr. Caplan’s laboratory observation into cellular matrix products for treating chronic and crippling wounds such as acute burns and bone and cartilage injuries — a product line that was acquired for $660 million by Smith and Nephews. The company also obtained the world’s first regulatory approval for an allogenic stem cell drug — its MSC drug. It is now being tested in 928 different indications, more indications than any other drug ever developed.

Non-infectious Vaccines — The success of Millicom gave Kimberlin the credibility to start his company with renowned polio hero, Dr. Jonas Salk. As the founder of The Immune Response Corporation, Kimberlin drove the strategy, recruited the management and scientific teams, and brought together its major corporate partners to advance Dr. Salk’s groundbreaking immunotherapeutics. Immune Response cemented young Kimberlin’s reputation as a high impact entrepreneur when it became the best performing U.S. stock in 1991. The Phase III trial on 2,527 HIV-infected patients vaccine (the largest immunotherapy trial conducted to that point) unfortunately failed to meet its clinical end point, a devastating personal loss to Kimberlin. Yet he derived comfort by exchanging the company’s B-cell lymphoma vaccine patent for stock in a startup backed by Microsoft co-founder, Paul Allen. This invention was key to the first FDA-approved immune-based cell therapy (prostate cancer vaccine sipuleucel-T). This drug appears to be more effective in African-American men with a 48% reduction in death compared to white men. Furthermore, the plant and the team that made sipuleucel-T also made the clinical and commercial supply of the first approved gene-therapy (the CAR-T therapy from Novartis). 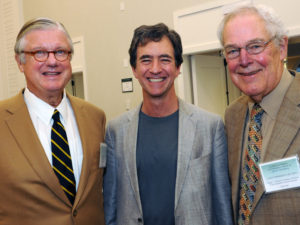 Health Care Transformation — For 15 years, Kimberlin fought to place hard evidence at the center of patient decision-making as one of seminal supporters of the Evidence-Based Medicine (EBM) movement, started by Dr. Jack Wennberg of Dartmouth College. Using EBM to inform patients of their healthcare choices was the lodestar for Health Dialog, Inc., in which Mr. Kimberlin was a pre-A round investor and a long term director. In that role, Kimberlin introduced several of Health Dialog’s key initiatives: its Series A funding; the financial guarantees required by its early customers; and an innovative “one-day IPO” that yielded $170 million for shareholders. These efforts sustained Health Dialog as it grew into one of the fastest growing healthcare companies in America. From this success, Health Dialog paid royalties of $130 million to support the application of Dr. Wennberg’s research, which became the impetus and economic rationale for The Patient Protection and Affordable Care Act.

In addition to launching new ventures de novo, Mr. Kimberlin also supports the ideas of other bold entrepreneurs. Here are some of his noteworthy discoveries:

As a first round investor, Kimberlin advised the CEO on the cash and stock acquisition of SeedInvest by Circle Internet, just as Circle was launching its U.S. Dollar Coin (USDC). Since then, SeedInvest/Circle has internationally expanded its mission of raising economic prosperity as the USDC became recognizedas the world’s most trusted and fastest growing digital dollar currency.  The firm was valued at $9 billion in April 2022 followed by a $400 million investment by Blackrock and Fidelity Management.

He was also an original investor in the Hispanic superstore chain called El Super. Partnering with the billionaire Chedraui family, El Super grew from start into a firm with 4,000 employees, serving 2 million customers and generating $1 billion in top-line revenues a year.

Mr. Kimberlin also bought into and brought together the funding to launch ShopNBC (ShopHQ), an Internet and TV convergence pioneer. Thanks in part to an additional investment by NBC and GE totaling $222 million, ShopNBC has generated a cumulative $10 billion in revenues. 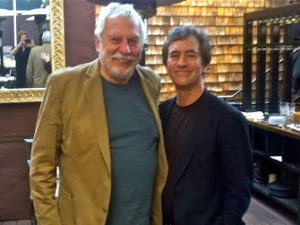 Kimberlin was not so fortunate with Nolan Bushnell, the man who launched the video game industry with Atari. The company Mr. Kimberlin backed was named Irata, which is Atari spelled backwards. At first it grew rapidly, but when the auditors caught the CEO looting its treasury, Irata collapsed. At the time, Bushnell said that losing Irata felt worse than missing out on Apple Computer, the company started at Atari by his three employees — Ron Wayne, Steve Wozniak and Steve Jobs.

On a more positive note, Kimberlin’s focus at Aperture Technologies helped turn that firm into a leading supplier of data center software to Fortune 100 companies. As its major investor and director, he pushed Aperture into the heart of cloud computing — energy and infrastructure management for data centers. Emerson Electric acquired Aperture and its top competitor, turning the combination into the dominant player in data center management software.

Kimberlin was also invited into the founding partnership of Corvis Inc., an optical networking firm. After securing $400 million from Cisco, Kleiner Perkins and others, Corvis raised $1.1 billion in the largest IPO for a pre-revenue start-up ever. At its public debut, the $38 billion valuation of Corvis was higher than the #1 firm in the Fortune 500 at that time.

To further promote social progress through science and technology entrepreneurship, in 1991 Mr. Kimberlin assumed control of Spencer Trask & Co. where he supports other high impact entrepreneurs, scientists, and technology leaders. He also gives to a variety of civic organizations including Harvard University (for its innovation lab), BeyondPolio and the Jonas Salk Legacy Foundation (for their efforts in supporting the eradication of polio worldwide), the Audubon Society (for its citizen-science and conservation programs), and Yaddo, the creative artist community, where he is an Honorary Lifetime Member in recognition of his support of writers, choreographers, dancers, playwrights and composers.

Mr. Kimberlin graduated from Indiana University and earned his masters from Harvard University.  He makes little fanfare about his activities, secure in a conviction best stated by Mr. Spencer Trask: what matters are “Deeds, not words.”

The Dawn of the Internet

The Dawn of the Internet (SlideShare)

The Origin of the Smartphone

The Origin of the Cellphone (SlideShare)